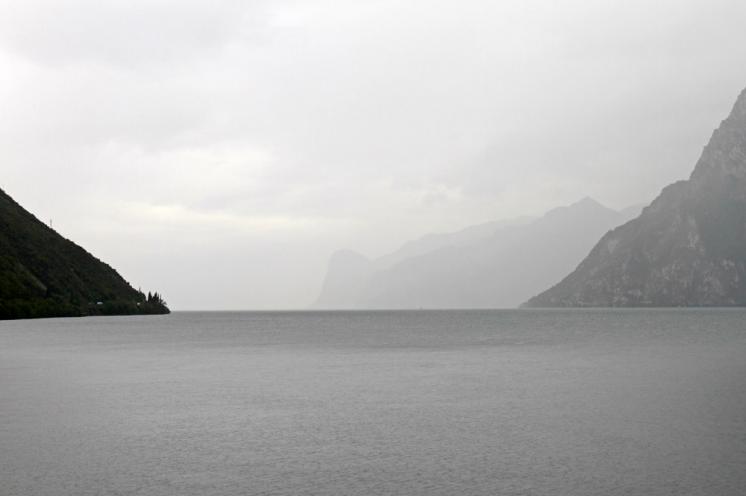 For the first time ever, all ten sailors entering the medal race at the Finn World Masters in Torbole have a chance of walking away with the title. With all racing cancelled on Thursday, the points difference from first to tenth is just 14, so theoretically they all have a chance of lifting the title.

Inclement weather was the order of the day. After five days of sunshine and relatively nice weather, the fleet awoke on Thursday to rain and no wind. While some wind did fill in for a while from the north, the rain and cloud effectively excluded the chance of a southerly developing.

No stability to the wind was expected and locals forecast a signifiant drop in wind speed during the early afternoon, so the decision was taken at 12.00 to abandon racing for the day and let the sailors make best use of their penultimate day in a very wet Torbole.

Now the focus turns to the medal race on Friday. Between them Rafa Trujillo (ESP), Vladimir Krutskikh (RUS) and Michael Maier (CZE) have won 15 out of the 24 individual heats sailed, so they remain the favourites. If any one of them wins the race, they win the title.

For the other seven sailors the stars all need to align to stand a chance. Piet Eckert (SUI) can win as long as he beats the top three by one place and finishes in the top three. Others have longer chances of winning, but in medal races anything can and does happen, so they all have some hope.

On the form of those in the medal race Krutskikh and Maier have won the title before, Trujillo has an Olympic medal and also won the Finn Gold Cup, and several others have Olympic experience. It is a world class lineup of sailors like this event has never seen before.

Torbole has put on great conditions for the first three days of the championship and a return to those conditions is expected on Friday with a solid southerly and sunshine forecast for the area. At least everyone will be able to leave dry – those who are camping here report moats around the tents after a day of incessant and often heavy rainfall.

Outside of the top ten, many favourites did not quite make it. With four fleets each day, a scoreline that would normally be enough to make the medal race was not good enough. Seven of those in the next ten boats have made the top 10 on previous occasions – but this year making the medal race has been the toughest fight ever.

Keep in mind the Legends, who have had a more challenging week than most, battling Garda's strong winds and cold waters, as well as each other. Howard Sellers (GBR) is close to his third Legend title, and holds a 28 point lead over Valerii Gusenko (UKR) and a 35 point lead over the defending champion Henry Sprague (USA). One of the oldest sailors here, Willi Meister (GER) is down in 318th place but has also managed to finish every race so far.

Yes, it has been a lot of Finn fun for the biggest group of Finn sailors ever assembled in one place. The fleet will not forget Torbole, and Torbole will never forget the Finn fleet.

On Friday the final races for the rest of the sailors are scheduled to start from 13.00, with the medal race to place place immediately after the last finish. We will attempt to bring some live coverage through Facebook.