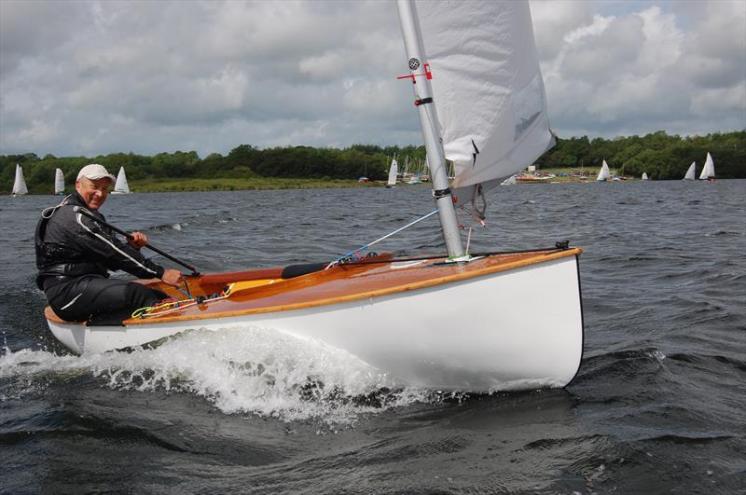 Maertin Hughes talks about the growing, and nostalgic, trend in restoring and sailing a Classic Finn

The Finn like many older designs of sailing boat is an iconic design, one that stands out in a crowd, one that is noticed and commented upon by bystanders. The real boat shaped hull, with the forward mounted un-stayed rig of the Olympic aspirants or the highly varnished well maintained wooden boat will both draw a crowd.

In the UK we have recognised the importance of the old classic Finn dinghies built before the modern race-boat era. Finns have been built in the UK since the early 1950s but so often these older boats are forgotten or just not raced. Yet many are our heritage and the pre-curser to the modern boat. The different hull shapes and building materials mean these older boats have some interesting characteristics, but they are often very inexpensive to buy and with a little work can be competitive at club and even at national levels.

Over the past 5-6 years several UK sailing clubs have developed small fleets of older Finns and have adopted the Classic and Vintage Racing Dinghy Association (CVRDA) CVRDA.org.uk classifications for older dinghies. Their simple classification of any boat is a ‘classic’ boat if it was designed before 1965 but built before 1985, has been used to establish ‘classic Finn’ classes in many clubs; however, all must be sailed with an aluminium or wooden mast and a white sail of cotton, polyester or Dacron.

There are many manufacturers of glass-fibre boats including Tiptree, Mader Vanguard, Butler, Lanaverre, Roga and Pata-Lemieux, all will probably need some work but will generally be sound hulls. If on the other hand you want a wooden boat some of the main manufacturers include Fairey Marine, Taylor, Morrison, Raudaschl and Warwick. Many boats have been restored to beautiful pieces of furniture but the very stiff hulls make them less competitive than most glass boats. One of the greatest advantages to the Finn class has been the demands set upon builders by Olympic competition, boats are not built down to a light weight, they are solid resulting in hulls built to the highest quality.

An old unrestored boat may be purchased for less than the cost of a second hand sail, but there may be lots of work to do, including re-decking and re-painting. This is especially the case, when the original glues used to put the decks onto the strongly made hulls, have begun to degrade. GRP hulls, once dried out, can be easily repaired, refurbished and repainted with modern glass-fibre products. Repairing dislocated flooring panels is quite straight forward. Restoring an old classic boat can be great fun and very rewarding, but do not expect to get out on the water very quickly.

In 1996 the British Finn Association (BFA) established a classic national championships, which has been hard fought over ever since. The fleets, sailing with alloy masts and Dacron sails, have gradually increased as more classic boat owners have restored old boats. Increasingly club fleets of classic boats have also grown and sailors have become more ambitious as they discover carbon rigs and plastic sails that they can use to be more competitive against the modern race-boats.

In an effort to meet this demand for the older boat owners the BFA have established a new classification specifically for boats recognised as ‘classic’ on the national race circuit. They have adopted a ‘classics with carbon’ grouping within the BFA. This is a classification that will sail in selected UK national events, where classic boat owners sail with a modern carbon wing mast and modern plastic film sail. This is simply any boat built on or before 1985 with a carbon rig and modern sail. This flexibility of rig choice allows sailors to compete alongside modern boats on nearly equal terms, but to also sail their alloy or wooden rigs with Dacron sails in classic events. The results have been surprising.

The first event was held at Northampton SC in October 2014, with 5 ‘classics with carbon’ participating. There were 25 boats in total sailing in testing gusty conditions. Martin Hughes sailing his 1957 Fairey Marine boat ‘Fino’, took the first classic place and fifth overall, with a worst place finish during the event of 10th. The old boats can still do it with a carbon rig performing well against other classics but also demonstrating they can perform against the likes of the UK’s top Finn sailors in their race boats.