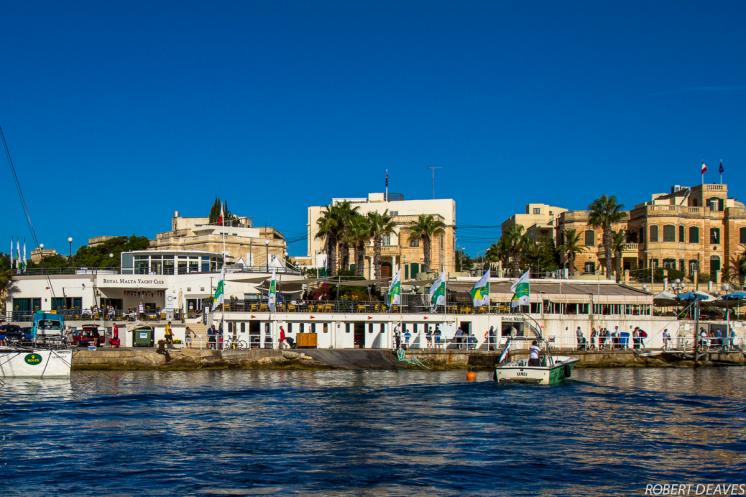 Finn sailing in the Middle Sea?

The locals like the fact that they keep Malta as a little secret to themselves. Malta is an archipelago with several small islands including two habited Islands to the north-west, Gozo and Comino.

The Island of Malta is about 27km in length by around 14km in width, and it is classed as the most densely populated country in the world having a population of around 420,000 people.

The history of Malta is vast, with inhabitancy dating back some 7,000 years and this can be seen in the architectural landscape, which litters the Island, the main focus being the impressive bastions and fortifications that protect the cities. With many cities in such close proximity the landscape is truly impressive.

It does take a couple of days to find your bearings, as the many waterways require you to travel around headlands and inlets, only achieving a short distance. We stayed at the capital, Valletta. This fortified city is situated on a peninsula with Grand Harbour on one side and the harbour of Marsamxett on the other. There are many creeks and waterways surrounding Valetta and the nearby area, giving it a little bit of a Venetian feel. Along these waterways, with roads running alongside, are many bars and restaurants, together with magnificent sites and attractions, the government having done a great deal of utilising the many historical war buildings.

It’s fair to say that the southern part of Malta is ideal place for a cultural holiday/break. The northern part of the Island is where the sandy beaches can be found.

The club is situated north-eastern side of the island, at Ta’ Xbiex, at the head Marsamxett Harbour, just a short way across the water from Valletta.

The club has excellent facilities for a Finn Masters Championship. Whilst we were there they were playing host to the Rolex Middle Sea Race, berthing the majority of the yachts and providing shoreside facilities for around 1,000 sailors. The crew party on the Friday night catered for around 2,000 people with several micro bars and buffet stations in place; our thoughts were to host the Finn Dinner in a similar style.

The bars and restaurants of the club are very good and I would imagine that the Finn sailors would use the club as a central meeting and social place. The food is reasonably priced with a large beer (local beer is Cisk) at €4. The club fronts onto the water’s edge with a lovely outlook across the water to the capital of Valletta. To the left had side going towards the hotels and bars of Sliema is a rocky bathing area with swim ladders into the sea. To the right hand side is the marina and parking, it is here that it is anticipated to keep the Finns in rows, with trailer and container storage on site. There will also be ample car parking here.

As mentioned previous it is anticipated to store the Finns along a private road, next to the club. We noticed that there were many 20ft containers in this area for use in the Middle Sea Race, so there is no worry on this front. This area will also store the road trailers and any containers that the Finns use during the event.

The harbour looks safe and sheltered and an easy launch into the marina, via constructed ramps, should be possible. The clubs also anticipates helpers on hand.

It is proposed to place the Legends in front of the club next to the club concrete slipway.

Our visit to the club and area was accompanied by Trevor Miller, who runs Sailcoach from the club, a Dinghy Sailing school. Trevor and his team have a good understanding of the Finn Masters requirements.

It is proposed to hold the racing outside of the harbour a sail out of around 1.5 km. this will be off the coast of Sliema and be very visible from the promenade. The sail in and out looks relatively easy with no restriction, while the back drop is very impressive. The race officer is a local PRO and has excellent knowledge of this area and a good understanding of the Finn Class requirements.

The hotel, apartment and b&b accommodation is vast in this area. The nearest hotels to the club are around 0.5km around the harbour at Sliema.  There are self-catering apartments one road back from the club. It is anticipated to use the Excelsior hotel, which is almost directly opposite the club on the other side of the harbour, which would be accessible via water taxis. The OA plan to negotiate a favourable deal at the time of the event. The hotel has excellent family accommodation with 4 star facilities including an outdoor pool, sunbathing area outdoor waterside bars and small rocky beach. The hotel also has a wonderful view of the sail out and in area, across to the club house.

Motorhome and Camper van facilities will be beside the dinghy storage area adjacent to the club. It is anticipated that fresh water and chemical disposal will be available. The outlook for the camping is across the marina and the facilities of the club are within 100 metres.

This was discussed at length, particularly in view of the failure at Lake Garda. The OA together with the Tourist Minister are very keen to showcase many of the island’s attractions and give the ladies and guests a cultural experience. It is proposed that a person will be allocated this task of ensuring we have an excellent programme. The idea is that the ladies and guests can sign up at the club for the nominated excursions.

The airport is 15 minutes away by car/taxi. There is also a comprehensive bus service on the island.

The airport is served by more than 30 airlines including Easyjet, Ryanair and Air Malta, with Emirates providing links thorough the Middle East. There are direct connections to most of Europe.

There are number of taxi firms but we were advised that the best true rate will be with hi cabs 2137 2137.

Its probably a good idea to bring a bike with you, especially if you are staying in Sliema, which is a short ride along the water front.

Ferries run from Genoa and Sicily, and favourable rates will be explored with the operators.

For southern Europeans, driving and ferry is probably the easiest way to get there.

For northern Europeans, it will probably be easier and cheaper to ship the boats by container and fly in. For comparable dates in 2017, a flight for one with 10 days accommodation in Sliema can be found for under €600.

Malta has a major container port, located in the south on the island, about 12 km from the yacht club.

The 2019 Finn World Masters will take place on June 7th – 14th. The expected weather in Malta during this time of year is light airs to 12 knots with the air temperature is in the region of 27°. Sea temperature is around 22°. Stronger sea breezes are due later in the year.

As mentioned previously, the history of the Island is vast and throughout the years has been sculptured by a number of different cultures. If you are extending your stay, then it is worth visiting the old city of Mdina and travelling up to the north of the island and visiting Gozo and Comino.

The beaches on the Island are in the north together with the blue lagoon.

All the known car hire companies are on the island.

. Drive on the left