A huge Finn spectacular that stands the test of time One week ago in a small village in north-eastern Spain, more than 350 Finn sailors made a very powerful and convincing statement. The 2018 Finn World Masters at the Club Naútico El Balís brought together some of the most influential, talented and successful sailors in the history of the class for a week of community, friendship, and discussion and, when the wind allowed, some close and exciting racing. It was an incredible statement about the current popularity of not just the Finn class, but the need for all-inclusive, fun and manageable racing across a huge age range. Sailors from 40 to 83 lined up together to enjoy a common aim, Finn sailing with and against friends, old and new. Some sailors renewed friendships made 50 years ago, many more made new friends that will last a lifetime. While the lack of wind was at times frustrating, the sailors made good use of the time, conversing, teaching, inspiring and exchanging ideas on what makes a Finn go fast, the state of the sport and on life in general. It was what happens in boat parks right across the world, except this was on an epic scale, with five boat parks to visit to explore the people and the boats.

Because of the conditions, the event ended up being so much more than the sailing, but of course the competition was key.

That José Luis Doreste could come back to the Finn after a 30-year absence and win the title with a 14-year-old boat says as much about the man as it does about the class. It is the first time in a long time, perhaps ever, that a Grand Grand Master has won the overall title. He was surprised as much as anyone, but ‘Once a Finn sailor, always a Finn sailor’ and he hopes to be back next year to defend his title in Denmark. The skills learned in the Finn last a lifetime. Doreste's success comes after a revival of the Catalan and Spanish Finn fleets over the past few years that resulted in the highest attendance ever by a Spanish fleet at the Finn World Masters, with 24 boats racing. This year’s Finn World Masters was a driving factor in increasing the fleet size, but the national fleet is also growing at all levels, not just the oldies. Indications are that this is not a peak, as is often the case with major events, but a step towards further growth, with many future plans already being made. It would seem the Finn World Masters has had a very powerful stimulating effect on the Spanish fleet.

Spain was also the best performing nation. Taking into account the top three sailors in each nation, Spain was the clear winner with three boats inside the top 10, ahead of Germany and Russia. Of the 32 nations present, 24 had three or more sailors attending. The biggest fleets as usual were from Germany (43) and The Netherlands (39). On the water only five out of eight scheduled races were sailed, with the event suffering from unusual and excessive inland thunderstorms that killed the normal thermal activity at the coast. They always say, “It’s not normally like this,” and it was probably truer this year than normal.

Whatever man plans, nature is in charge. It was with comic irony that after a week of light or non-existent winds, the prizegiving was held in a strong onshore breeze. To add insult to injury, on the following few days the breeze continued to blow, taunting those who stayed in the area, though sometimes there was even too wind to hold racing. Everyone had expected a week of steady and reliable 10-15 knot thermal winds, but the only thing steady and reliable was the hospitality of the club and the daily calls to enjoy the huge volumes of free beer, cava and strawberries at the parties each evening.

The race management was slick and efficient, with no delays in the three races sailed, with 12 individual starts, on the third day of the event, and the first day of racing. Doreste was the best on the day, the only sailor to win two races and he took that lead into Friday after Thursday remained windless. The final day brought much needed wind from the opposite direction with many recalls and false starts in the shifting wind and current. Undeterred, the race team adjusted and managed everything perfectly to make two more great races to save the series and allow a discard.

The defending champion, Vladimir Krutskikh, stumbled with an uncharacteristic 13th, on Wednesday and though he scored better than Doreste on the final day, did not make the top three. Antonio Poncell, 11th last year in Barbados, sailed the best final day, nearly won both his races, to take a well deserved second overall. Third placed Giacomo Giovanelli took his second major Masters medal, following a bronze in the Masters category in 2015, after recovering from a black flag scoring penalty in the fourth race, to tie on points with Poncell. The top three also cleaned up the Grand Grand Masters Grand Masters and Masters categories, in that order. That was also a first. The spectacular and energising prizegiving on the beach, complete with a pulsating backing music and confetti cannons, acknowledged and celebrated the heroes of the week. After the great final day of racing, the prizegiving ended the event on an incredible and emotional high. It was how all prizegivings should be done, with passion, with ceremony and with celebration. There was more than one wet eye in the cheering audience, especially when more than 40 amazing Legends took to the stage to be acknowledged and saluted by their peers and friends.

Taking part in the Finn World Masters is as much a battle against yourself as it is against your fellow competitors. Former world champions and Olympic gold medalists line up alongside the 83 year old Super Legends or recently converted enthusiasts who only took up Finn sailing in their 50s. All were having fun, enjoying the boat, the hospitality and the huge community of friends.

The biggest problem for the last few years has been finding venues big enough to take the fleet. Sooner or later it will expand past 400 entries, and that will bring new opportunities, but even that is still less than 50 per cent of the active Finn Masters fleet worldwide. It's interesting to note that two years ago the event also attracted more than 350 entries, but in El Balís, more than 100 were first time entries. The numbers keep getting bigger.

Next year the venue is a marina in Denmark even larger than El Balís. Then in 2020 the fleet will celebrate a half century of Finn Masters sailing on the Grevelingenmeer in The Netherlands. Calls are also getting louder and louder for events outside the traditional European venues, with Rio, Thailand and Sydney keen to bid for future events. And then to cater for the huge demand for Finn Masters events, this September the first ever Finn European Masters will take place in Split, Croatia. The growth is unstoppable, and in the end it comes down to the boat and the people. As one Master commented , "What a boat! What a Class!"

For an event that started really small on a lake in Switzerland by a group of Finn friends, the Finn World Masters has grown into one of the biggest single class events in the world. It is hot property - just look at all the wonderful sponsors below - and will continue to be the main focus for a group of like-minded, enthusiastic, aging athletes who would rather not be anywhere else than sailing with their friends in a Finn.

Where will you be next year? 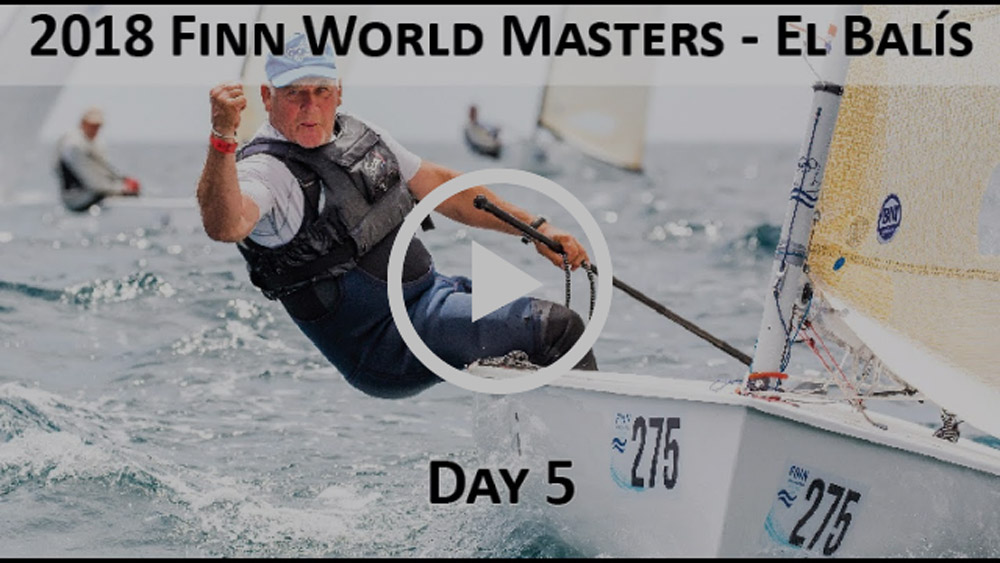 A huge amount of data was compiled before the event, and more will be released later, but here are a few snapshots. * Age categories of top five boats in each race

Top five positions by nation in each fleet race

* Thanks to Richard Phillips for compiling and analysing the data included here. 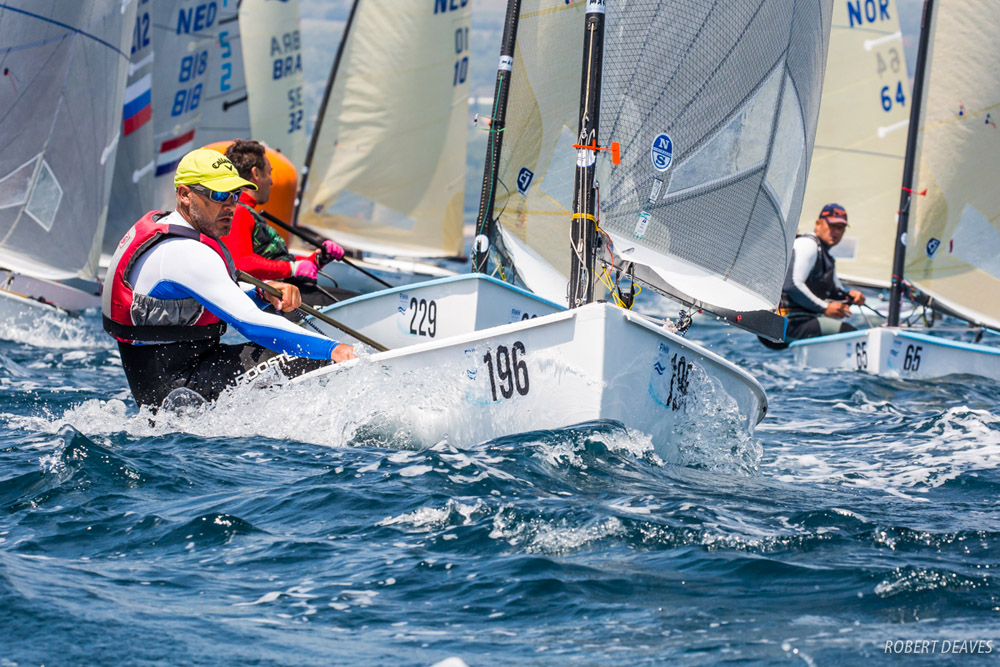 How to see more content from the 2018 Finn World Masters

More than 900 photos have been uploaded to the Finn Class Flickr page at https://www.flickr.com/photos/finnclassphotos/

On the Finn World Masters Facebook page there was extensive Facebook Live coverage of starts and mark roundings. (Thanks to Claire ADB.)

On the club's Flickr page there are over 1,000 photos

All the videos are also available on FINN TV. All filming was by Grupo Lavinia except the aerial video filming by Paco Quiñonero. See you next year